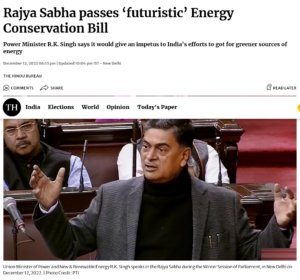 ⦿ The non-compliance can also attract a penalty of up to twice the price of oil equivalent of energy consumed above the prescribed norm.

⦿ The 2022 Bill amends this provision of the Act to provide for an Energy Conservation and Sustainable Building Code.

⦿ This new code provides norms for improving energy efficiency and conservation, use of renewable energy and other requirements for green buildings.

⦿ The Act provides that the code applies only to commercial buildings that were built after the notification of the code, and have a minimum connected load of 100 kilowatt (kW) or 120 kilo volt-ampere (kVA) contract load.

⦿ The Act allows setting up energy consumption standards for equipment and appliances that consume, generate, transmit or supply energy.

⦿ Bureau of Energy Efficiency (BEE) is set up under the Act. The governing council of BEE has 20 to 26 members.

⦿ Vehicle manufacturers who fail to comply with the standards will have to pay a maximum penalty of up to Rs.50,000 per unit of the vehicle sold.

Current Affairs from “The Hindu” and “Indian Express” for UPSC & State PSC Exam. 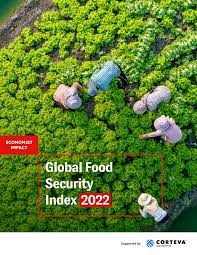 ⦿ The 2022 Global Food Security Index (GFSI) report was released by the British weekly The Economist. In this report, South Africa overtook

⦿ India is ranked at 71st position in the Global Food Security (GFS) Index 2021 of 113 countries.

⦿ The GFS Index was designed and constructed by London-based Economist Impact and is sponsored by Corteva Agriscience.

⦿ The 2021 GFSI is the tenth edition of the index. It is published every year.

⦿ It measures the underlying drivers of food security based on the following factors:
@ Affordability
@ Availability
@ Quality and Safety
@ Natural Resources and Resilience

⦿ Ireland, Austria, the UK, Finland, Switzerland, the Netherlands, Canada, Japan, France and the US shared the top rank with the overall GFS score in the range of 77.8 and 80 points on the index. 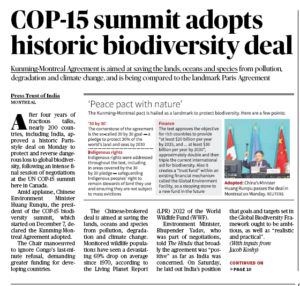 ⦿ Negotiators reached a historic deal at a U.N. biodiversity conference early Monday that would represent the most significant effort to protect the world’s lands and oceans and provide critical financing to save biodiversity in the developing world.

⦿ The global framework comes on the day the United Nations Biodiversity Conference, or COP15 is set to end in Montreal

⦿ India’s position that goals and targets set in the Global Biodiversity Framework ought to be ambitious, as well as “realistic and practical.”

⦿ One of the proposed recommendations in the draft text is reducing the overall risk from pesticides and highly hazardous chemicals by at least half by 2030.

⦿ Protect 30% of land and water considered important for biodiversity by 2030, known as 30 by 30. Currently, 17% of terrestrial and 10% of marine areas are protected.

⦿ The Wildlife Conservation Society and other environmental groups were concerned that the deal puts off until 2050 a goal of preventing the extinction of species, preserving the integrity of ecosystems and maintaining the genetic diversity within populations.

What are carbon markets and how do they operate 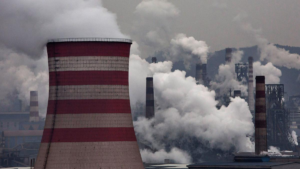 ⦿ The Parliament passed the Energy Conservation (Amendment) Bill, 2022 on Monday, December 12, declining the Opposition’s demands to send it for scrutiny to a parliamentary committee and amid concerns expressed by members over carbon markets.

⦿ The Bill amends the Energy Conservation Act, 2001, to empower the Government to establish carbon markets in India and specify a carbon credit trading scheme.

⦿ Article 6 of the Paris Agreement provides for the use of international carbon markets by countries to fulfil their NDCs.

⦿ Carbon markets are essentially a tool for putting a price on carbon emissions— they establish trading systems where carbon credits or allowances can be bought and sold.

⦿ Carbon credit is a kind of tradable permit that, per United Nations standards, equals one tonne of carbon dioxide removed, reduced, or sequestered from the atmosphere

⦿ Voluntary markets are those in which emitters— corporations, private individuals, and others— buy carbon credits to offset the emission of one tonne of CO 2 or equivalent greenhouse gases

⦿ Such carbon credits are created by activities which reduce CO 2 from the air, such as afforestation.

⦿ In a voluntary market, a corporation looking to compensate for its unavoidable GHG emissions purchases carbon credits from an entity engaged in projects that reduce, remove, capture, or avoid emissions.

⦿ Compliance markets— set up by policies at the national, regional, and/or international level— are officially regulated.s