Expected Question from (Article) “The Hindu” for IAS/IFoS Prelims 2023

Q Which of the following statement is/are correct?

1 Article 200 does not prescribe a timeline for the Governor to provide assent to Bills.

2 In Purushothaman Nambudiri vs State of Kerala (1962), a Constitution Bench of the Supreme Court clarified that the Constitution does not impose any time limit within which the Governor should provide assent to Bills. 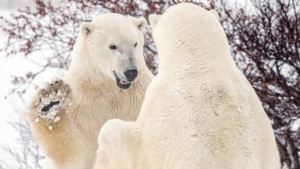 ⦿ Western Hudson Bay polar bear population in Canada has declined by 27 percent in the past 5 years.

⦿ The polar bear population in Western Hudson Bay is expected to be among the first to go extinct.

⦿ In 2021, the number of cubs produced by the Western Hudson Bay polar bears has fallen, causing concerns about the aging population and increasing vulnerability to melting sea ice.

⦿ The government study found that currently there are only 618 polar bears remaining in 2021.

⦿ The direct link between the polar bear population decline and the sea ice loss in Hudson Bay is still unclear since four of the past five years have witnessed moderately good ice conditions.

⦿ Around 7 percent of the global population (574 million people) will live in extreme poverty by 2030.

⦿ Every 100 children in low and middle-income countries, 60 are “learning deprived” and 10 are deprived of schools.